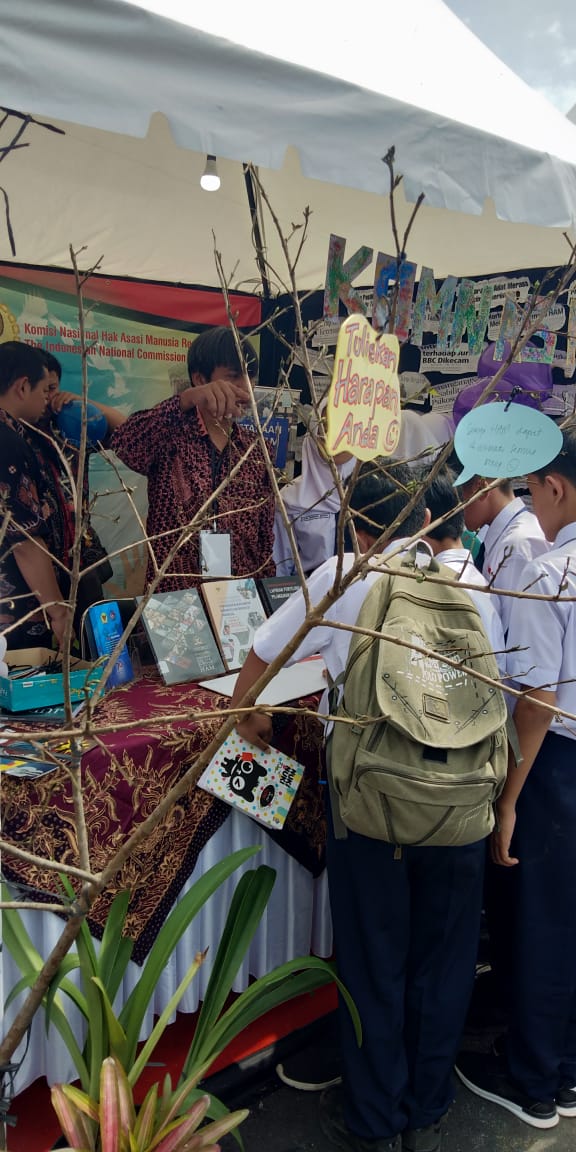 As part of Festival HAM 2018 Wonosobo, held from 13 to 15 November 2018, Komnas HAM set up its own informative booth to engage representatives from other Non-Government Organisations and members of the public.
This booth was decorated under the main theme of “Halloween”. The interior decor was lined with pictures of leafless guava trees, which was complimented by newspaper cut outs of various human rights violations.
If that does not scare you, the booth was also decorated with white masks hanging atop black cloths. The purpose of this was to add an element of “fun” and show that Komnas HAM is always prepared to be festive.
Fauzan Faradli, a staff who was managing the Komnas HAM booth added “we can complete this look by adding bats to the backdrop of our booth. Also, the books we have on display about past human rights violations also looks creepy.”
Despite its creepy outlook, the Komnas HAM booth attracted visitors from various backgrounds and ages. This included Central Java Governor- Ganjar Pranowo and Wonosobo Regional Head Commissioner- Eko Purnomo, who paid a visit together with the Chairperson of Komnas HAM- Ahmad Taufan Damanik.
Since opening at around 09.00 WIB the Komnas HAM’s booth immediately attracted members of the public such as school children and adults from various walks of life. Children of elementary, middle and high schools enthusiastically visited the Komnas HAM booth.
They diligently ask questions about human rights (HAM) and enquired about the role of Komnas HAM, which was received enthusiastically by Hari Reswanto, the coordinator of the Komnas HAM booth.
To keep a record of our visitors, Hari Reswanto invited all guests and visitors to sign the attendance list.
"On the first day of opening, November 13, 2018, Komnas HAM’s booth was visited by hundreds of people from various agencies / institutions," said Puspawati who prepared the attendance book.
Additionally, Hari Reswanto asked visitors to write their hopes regarding the situation and conditions of human rights in Indonesia. The writing that contains hope is then asked to be hung on the tree of hope that has been provided.
Visitors seemed happy to write down their hopes. The tree of hope was soon filled with papers containing writings about the expectations of the visitors. Visitors, especially children, seemed more happy when invited to take a quiz.
Hari Reswanto who was accompanied by Andri Umar Sidiq, an IT expert, delivered a quiz in the form of questions about human rights. These questions turned out to be answered well by the children who visited. Komnas HAM gave prizes in the form of pencil cases, books, t-shirts, etc. to those who are able to answer the quiz correctly.
"The children of Wonosobo children are very smart," said Mochamad Felani who also took care of the Komnas HAM booth.
In order to attract more visitors, the Komnas HAM booth also gave gifts to visitors aged under five. Additionally, Komnas HAM gifted balloons to toddlers.
Komnas HAM is one of 32 institutions that has set up a booth in Festival HAM 2018. The booth is open from around 09.00 WIB until 18.00 WIB for three days.
Other booths come from district / city representatives, banks, communities of people with disabilities, small and medium enterprises (SMEs) and others.In addition to showing off the results of Komnas HAM's performance at the Komnas HAM booth, it also serves to provide consultations on human rights, games and quizzes, and screens human rights films.
If you want to get a prize, you want to be smarter, wish to meet the friendly and exciting booth guard, visit Komnas HAM’s "Halloween" booth. Let's Promote and Enforce Human Rights! (Rusman Widodo/Jeff)