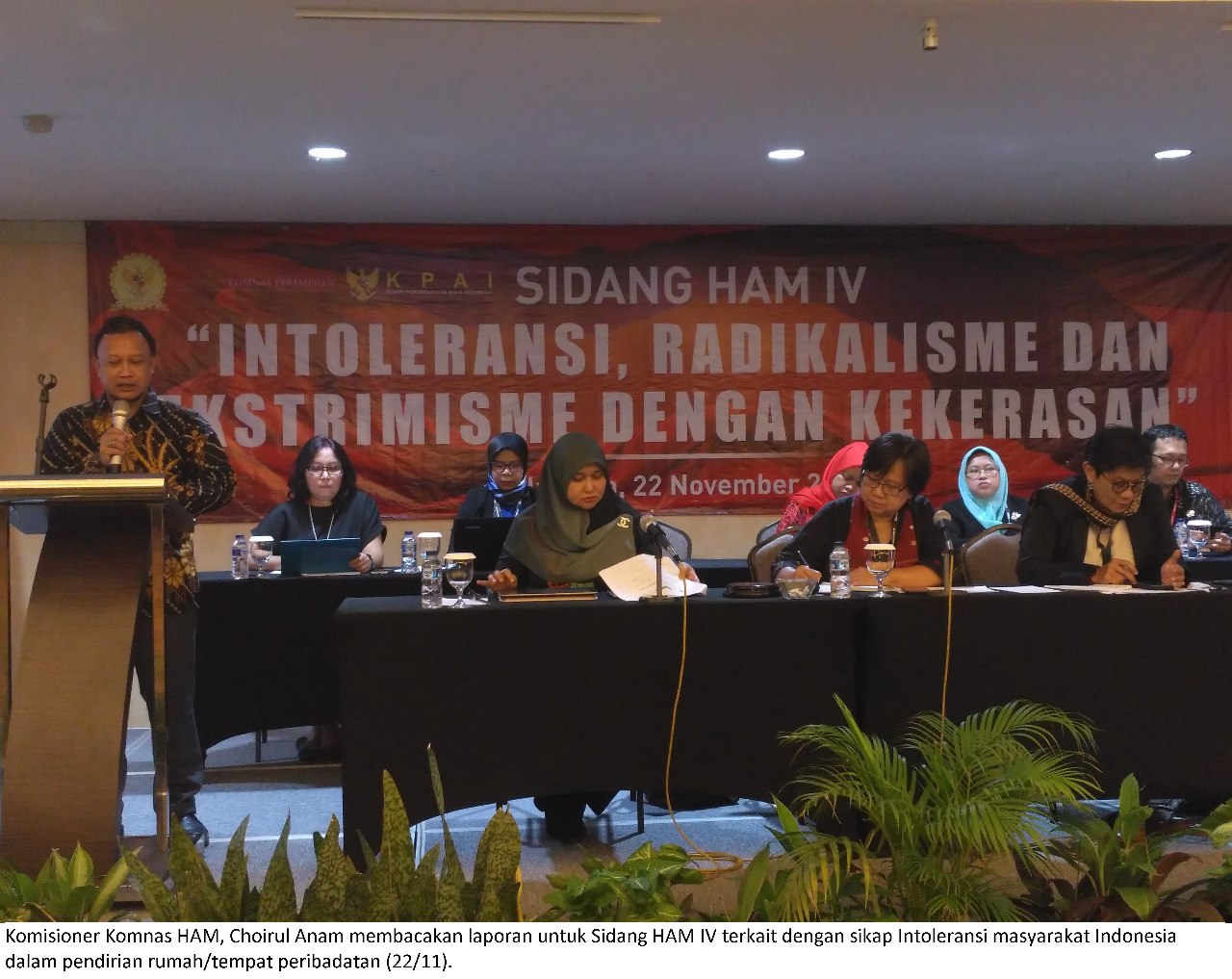 Komnas HAM held a press conference on 23 November 2018 to publicise the results of the Human Rights Council Session (Sidang HAM) held from 21st to 22nd November 2018.
The panel of speakers who attended the press conference included Sandra Moniaga, Deputy Chair of Komnas HAM; Beka Ulung Hapsara, Commissioner of Komnas HAM; Dr Susanto, Commissioner of Commission for the Protection of Children (KPAI); Magdalena Sitorus, Commissioner of Komnas Perempuan; Rita Pranawati, Commissioner of KPAI; and Yuniyanti Chauzaifah, Commissioner of Komnas Perempuan.
In the spirit of collaboration, the press release was read in three parts by Beka, representative of Komnas HAM; Magdalena, representative of Komnas Perempuan; and Susanto, representative of KPAI.
Beka began by announcing the results of Sidang HAM 2018, “Sidang HAM 2018 was focused on addressing intolerance, radicalism, and violent extremism. We determined various push and pull factors which encourage radicalism and have collectively agreed upon various recommendations and strategies as potential solutions to the issues”.
Beka added “our institutions have also discussed issues related to religious freedom, and discrimination. We strive to work to enhance the spirit of tolerance and inclusivity in all communities in Indonesiam.”
Susanto asserted that children who are involved in terrorist acts must be considered victims and highlighted the importance of screening school teachers in Indonesia to ensure that radical sympathisers do not spread radical propaganda in Indonesian schools.
“We need to ensure that there are more teachers who have been trained to assist in the rehabilitation of children who were forced to become child soldiers.”
Magdalena suggested that regulators and relevant parties must take a multi-dimensional approach when addressing issues of intolerance, radicalism, and violent extremism.
“Dialogs and conflict resolutions only cover one aspect of the issue. Together we must design new preventative measures which can change the intolerant mind-set permeating throughout the Indonesian society to protect women and children,” Magda said.
During the question and answer (Q and A) session of the press conference, Beka held that “religious intolerance is rampant in almost all regions of Indonesia. We have heard the stories of victims of religious intolerance which have come in the form of acts of arson on churches, and the obstruction of the construction of a mosque in Aceh.”
Magdalena added that Indonesia must address the issues related to the social stigma attached to innocent family members of alleged terrorists.
While Susanto asserted the importance of Indonesian regulators taking a strict stance against teachers who have either shown symptoms of radicalism, or are known radical sympathizers.
“We must ensure that the teachers are not only removed from the education system, but are also rehabilitated,” Susanto asserted.
Yuni, Commissioner of Komnas Perempuan concluded the Q and A by adding that studies have shown that women (mothers) have the power to influence and deter radical ideologies. “Komnas Perempuan is working on strategies on how we can empower women to stop intolerance, radicalism, and violent extremism.” (Jeff)