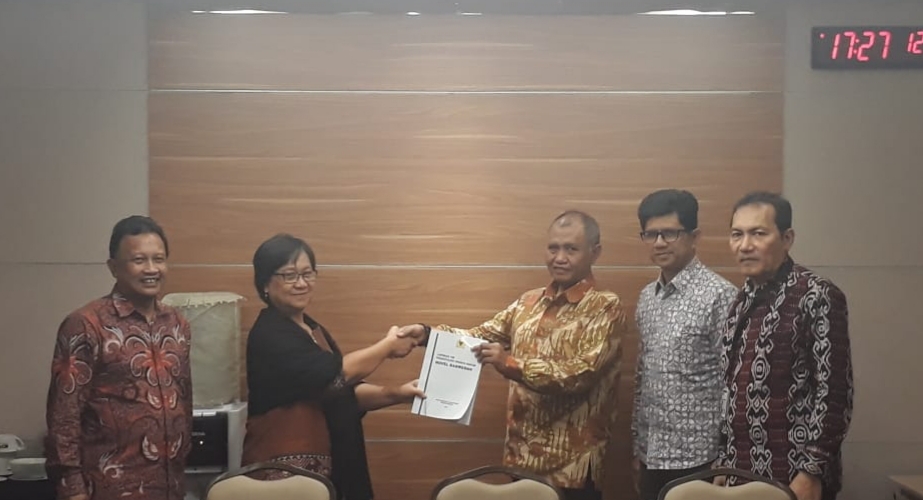 Komnas HAM submitted reports and recommendations compiled by Komnas HAM’s Legal Process Monitoring Team on Novel Baswedan Case.
The team was established by the Komnas HAM's Plenary Meeting to investigate alleged human rights violations that were experienced by KPK Senior Investigator Novel Baswedan.
The report and recommendations were submitted by the Deputy Chairperson of the Komnas HAM, who also acted as Team Leader, Sandrayati Moniaga, to the Deputy Chief of Police, Com. Gen. Ari Dono and KPK Chair Agus Rahardjo separately, on Friday (21/12).
A controversial case which has been publicised all over Indonesia, Novel Baswedan was the victim of an acid attack by unknown assailants after the morning prayer on Tuesday, April 11, 2017 at the Al Ihsan Mosque near his house on Jl. Deposito RT 03 RW 10, Pegangsaan Dua, Kelapa Gading, North Jakarta.
Komnas HAM regards Novel Baswedan as a human rights defender. As such, the State is obliged to provide effective protection to  him and other human rights defenders against harm and violence.
According to the Komnas HAM, the assault and attack experienced by Novel Baswedan was premeditated and highly organised by parties whose identities are yet to be revealed. The action plan to investigate into the case involves uncovering the parties acting as: (1) planners, (2) scouts, and (3) perpetrators of violence.
Although there is sufficient initial evidence to physical violence and resulting damage, based on the results of Komnas HAM monitoring, there are also alleged violations of the right to security, the right to be treated equally before the law, and the right to protection of human rights and basic freedoms without discrimination as guaranteed by the Indonesian Constitution.
To this day, the perpetrators of the heinous crime in the Baswedan's case have not been brought to justice. Further, none of the perpetrators have been named as suspects.
As such, Komnas HAM concluded that the Jakarta Regional Police Team was unsuccessful in capturing the perpetrators due to bureaucracy and unnecessarily lengthy disclosure process.
As a response to the situation, Komnas HAM submits recommendations to relevant parties in an effort to accelerate the disclosure process and create conditions conducive to the promotion, protection, enforcement and fulfilment of human rights. Komnas HAM is working to ensure that similar events do not recur in the future.
Komnas HAM recommend to the The Indonesian National Police Chief General Tito Karnavian to establish a joint team to uncover facts of the incident and discover the identities of the perpetrators who committed the violence acts against Baswedan Novel. The  joint team consisted the National Police of Indonesia, The KPK, community leaders, experts and other relevant parties.
Komnas HAM urges to the Police Chief that the Joint Team is established as soon as possible and ensure that the team would have access to resources which would allow them to work effectively in accordance to applicable procedures.
In order to ensure the success of this collaboration, Komnas HAM recommend KPK's Chief to take legal steps be taken to prosecute perpetrators of the Baswedan case. This also should include suspects who have taken measures to obstruct relevant legal proceedings (obstruction of justice).
Komnas HAM also suggest enhancing the protection provided to all KPK members and other human rights defenders.
Additionally, Komnas HAM recommends that the President of the Republic of Indonesia ensure the establishment of a Joint Team by the National Police Chief is supported and there is a commitment to ensure the success of its implementation. (Egi /MDH/Jeff)